Here is my translation*. 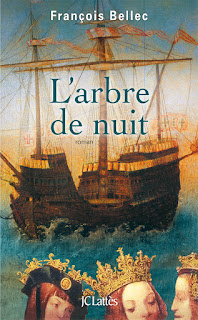 Signal flags and pennants were run up to the mast-tops enjoining all vessels to make ready to sail and heave their anchor cables to short stay. After checking the acknowledgements indicating that all were ready, the board of dignitaries on the flagship countersigned the order to depart. Seconds later, the decks were swarming with sailors. The Master jumped down from the aftercastle then stood above but a couple of paces back from the Captain, dom Afonso de Noronha, and Viceroy who had closed ranks without exchanging a word. From here the Master was within easy hailing distance of his men.

The signal to make ready to sail had stirred the fleet and lifted spirits both on deck and in the rigging as the crew hoisted signals repeating the Captain-General’s orders. Church bells across the city began pealing loudly but were soon drowned out on deck by the bell on the forecastle breastwork. Trumpets, shawms, sackbuts, recorders, cornetts, cymbals and drums helped give a relatively common event for a sailor an air of festive, even historic, splendour.
After going through the motions of a formal exchange with the Captain-General and Captain, the Master piped for the crew’s attention then cupped his hands and roared:
– Loose the foresail!

On hearing the order repeated on the Master’s mate’s whistle, the foremast topmen unfurled the foresail. Flapping gently against the mast, it hung from the yard with the cross of the Order of Christ spread out wide. Held by her anchor but feeling both the ebbing tide and the north-easterly, the carrack rolled gently from side to side, her foresail filled but backed, her bow to the city and her stern to the Atlantic as if reluctant to leave. François, acutely aware of the challenge to come, particularly for a vessel ten times bigger than anything he had ever known, wondered just how the Master planned to swing her bow to the open sea. The rest of the fleet had been swung around, bow to sea, by their boats aided by the morning flood tide. They were thus ready to set sail just a soon as the flagship had shown the way. Bastião Cordeiro, the flagship’s Master, had st himself a task and a half. Supremely confident, he had obviously thought hard about his daring but pointless manoeuver for the pure pleasure of it and for the sheer bravura of offering Portugal’s Viceroy of India a majestic departure. With the entire fleet ready to sail, every sailor watched the flagship intently as they awaited the audacious manoeuver.
– Heave the anchor to short stay!

Under the forecastle, sailors impatient after the long wait strained at the capstan to the tempo of a shanty and the click of the pawl on the ratchet ready to prevent the drum from unwinding. Chests and arms on the bars, they began to haul on the anchor heavy cable – thick as a man’s thigh – and warp the carrack against the tidal stream. Taut under the strain, the cable dripped wrung water and reeked of tar and sludge. After a few minutes that felt like hours, the Master’s mate, hanging from a foremast shroud, swung out over the Tagus to check that the anchor was straight up and down. With a blast of his whistle and a wave of his arm, he stopped the capstan then went astern to report:
– Anchor apeak!
– Brace the foresail to starboard! Loose the sprit-sail! Weigh anchor!

The men on the capstan bars strained harder than ever to break out the enormous cast-iron anchor, its flukes deep in the riverbed as if hanging on desperately to the Portuguese mainland. Finally, up she came. Dark, shiny and dripping, like the skeleton of some sea monster.
– Anchor up!
– Cat the anchor! Helm hard to starboard!

The order was relayed through the hatchway to the helmsmen under the quarterdeck. Heaving hand-over-hand on the helm tackle, they forced the tiller and rudder hard over to the starboard stops.

Responding gently to the tidal stream, Nossa Senhora do Monte do Carmo began to make way astern while turning slowly upon herself to larboard under the combined action of the breeze forward – the foresail had filled while the small sprit-sail under the bowsprit backed – and the rudder’s resistance. François explained to his companion that it looked as though the ship would come to a standstill when perpendicular to the wind, with no hope of completing the intended turn given the hull’s size and windage and that she was making no headway.
– So …?
– Well, either they drop an anchor or we run aground.
– Is this the way it’s usually done? It seems very complicated doesn’t it?

Several sailors were busy securing the great bower to the starboard cathead, well aware that if ever it were to shift as the ship rolled with the first swells on leaving the channel, the moving mass of iron could wreak tremendous damage.
– Loose the main-sail!

The brails loosed, the passengers below were startled by a great whooshing and flapping as the unfurling canvas billowed and filled fitfully. The huge red cross of the Order of Christ spread out as if challenging the forces of evil hampering the sail’s smooth filling as it fought the blustering wind and flung rigging and blocks in a crazy dance punctuated by frightening claps.

Suddenly, as if there had been a quick change of scene, the carrack stood magnificent under the intensely blue sky with a scattering of small cumulus presaging fine weather. Like a bold monument to discoverers and the glory of Portugal. Leaning toward the open hatch at his feet, the Master gave an order that nobody heard, but which resulted in a large splash aft and a shudder under foot. A few seconds later, the ship heeled to starboard then began to make way astern, a motion that both surprised and unsteadied many of the onlookers. As the kedge anchor that had just been cast from the stern took hold and its cable took the strain, the carrack lost way astern. The passengers’ view of the world now began to turn as if by enchantment.
– Harden up the foresail! Brace the mainsail to larboard and fill! Helm amidships!

To the tempo of the Master gunner’s strident whistle, the deck hands hauled feverishly on the tackles to brace the mainyard. The main sheets being one of the gunner’s responsibilities, he had one of the four petty officers’ pipes on deck. To the measure of the yeoman’s pipe and aided by several of the ship’s boys, other sailors hauled hand over hand on the sheet tackles to fill the mainsail. The ship began to speak, as pleasant to the sailor’s ears as a babe’s babbling to its mother’s. The forces of evil having, it would appear, yielded, the enormous sail suddenly filled with a clap. And just as suddenly, all went quiet aloft. The moment he felt that the heading was right and the sails in hand, the Master shouted down the hatch:
– Let the kedge anchor go!

Cut clean with an axe, the cable shot through the hawsehole then whipped through the air, leaving the kedge anchor in the Tagus mud. A cork buoy bobbed on its pendant indicating the spot in the ship’s wake where a shipyard barge would later recover the precious item of crown property. The signal flags were hauled down, indicating to the other vessels they should weigh anchor in order of precedence according to their Captain’s rank.
– Hoist the fore topsail!

Impatient after the long wait, the topmen shot up the foremast shrouds while the mainmast topmen stood ready at the foot of theirs. When the carrack had gathered sufficient headway, the Master fine-tuned his pyramid of canvas, adding a couple of Order of Christ crosses to the skyscape. Since Prince Henry the Navigator’s time, the blood-red crosses on raw canvas symbolised the country’s Christian faith and the Order’s moral authority over the discoveries. They also evoked Henry’s critical role in funding expeditions when Portugal was still a poor cousin, which is to say before it became the richest country in the world and foreign courts referred to Manuel I, with bitter envy, as the ‘pepper king’.
– Hoist the maintopsail! Loose the mizzen!

The lateen mizzen-mast sail unfurled then filled with a clap like a musket shot that startled the dignitaries on the aftercastle, including those who were just beginning to feel as though they were getting their sea legs.

The Master crossed himself then handed over to the Tagus Pilot. On a broad reach and under full sail, with the rest of the fleet in her wake, Nossa Senhora do Monte do Carmo was ready to work through the channel. The Master’s authority, the arcane skill that enabled him to drive the huge carrack where he wanted, to have her respond to his voice like a well-trained horse, had charmed the onlookers one and all. Suddenly, François bellowed “Bravo!” and the crowd responded with applause, laughter and lively conversation. On the quarterdeck, the Viceroy himself wiped the furrows from his brow and applauded elegantly, the Captain following suit with compliments and courtiers accompanying them with applause. Resenting the tributes to the rough Master’s skill, the High Seas Pilot-General went below before the manoeuvre had been completed, a worried scowl on his face.
***
FR: 1,650 words. EN: 1,573 words.

The original is entitled L’arbre de nuit, literally ‘the tree of night’. This appears to correspond to what is now called night blooming jasmine (Cestrum nocturnum) or possibly Arabian jasmine (Jasminum sambac). The version proposed here is simply a working title.

* My thanks to Graham Cross who, in addition to being both an eminent translator and an experienced sailor, has sailed on a modern replica or a carrack
and thus has a good idea of how they handle.
at July 02, 2017

As reported on 15 September, this blog has been hacked. The posts remain in place, but many of the links are corrupted almost as soon as the...